An eclectic collection of marques makes up the list of the ten most-expensive cars sold at public auction in 2016: true to form, Ferraris are the most common marque on the list but currently the top-ten prices also include a Mercedes Benz, a Bugatti, a Jaguar, a Porsche, and an Aston Martin.

(Monterey Week is likely to change the list drastically – see update for 2016).

The 11 highest results for cars sold at public auction thus far in 2016 were:

*An extra car was added as the Aston Martin is a not-running design study reserved for James Bond.

This car, as an official Scuderia Ferrari entry, finished second in the 1957 Mille Miglia race with Wolfgang von Trips as driver. The same year, Mike Hawthorn set the first ever La Mans lap at a speed exceeding 200 km/h in this Ferrari.

After helping Ferrari win the 1957 World Championship, the car was sold in the USA. It had its best finish ever when it won the 1958 Cuban Grand Prix in Havana in blue-and-white N.A.R.T livery. The car was in the Bardinon Collection from 1970.

The 1957 Ferrari 335 Sport was only the sixth car ever to sell for more than $20 million and the second to break the $30 million barrier.

This 1961 Ferrari 250 GT SWB California Spider, chassis 2871, had only three Italian owners. The car appeared briefly in Vittorio De Sica’s Academy Award®-winning feature film, Yesterday, Today, Tomorrow, when Sophia Loren hitched a lift after crashing her Rolls Royce. It is in a well-maintained but unrestored condition.

The 1937 Mercedes Benz 540 K Special Roadster set the new Scottsdale classic car week record when it sold for $9,900,000 at the RM Sotheby’s Arizona 2016 auction. It narrowly missed out on becoming only the third Mercedes-Benz to have sold for over $10 million.

The 1937 Mercedes Benz 540 K Special Roadster by Sindelfingen is an original US delivery car with known history. It is one of the earliest 540 Ks made and has the desirable long tail, high door configuration. It is believed to have covered only 10,277 miles since new.

Bonham’s sold the 1937 Bugatti 570 SC Sports Tourer for $9,735,000 to hold the Amelia Island record for about a day. This was also the second highest nominal price ever paid for a Bugatti at public auction – the record is still held by the 1931 Bugatti Royale Kellner Coupe that sold for $9.8 million in 1987! Only 43 lower body Type 57 S cars were built with only two fitted with Vanden Plas coachwork with hits one the only one with a four-seater convertible body.

Bonhams top result at Monaco was €7,245,000 for a 1953 Jaguar XK120C C-Type Sports-Racing Two-Seat Roadster. This car finished ninth at Le Mans in 1953 racing for the Belgian Ecurie Francorchamps team. (The three Works entries finished first, second and fourth.) The Jaguar was sold in unrestored but well-maintained condition by the Griffith family that owned the car since 1963.

Gooding’s top result at Scottsdale 2016 was $ 6,490,000 for a 1950 Ferrari 166 MM / 195 S Berlinetta Le Mans. This car won the 1950 Giro delle Calabria as an official Ferrari works entry. It was sold to Brigg S Cunningham in 1950 and upgraded by Ferrari to 195S specification. It was the first closed Ferrari competition car delivered to the USA.

A 1955 Porsche Spyder sold for $5,335,000 at the Gooding Amelia Island auction. This was the highest result of the 18 cars, including 16 Porsches, entered into the auction by comedian Jerry Seinfeld. The car is in a magnificent condition – partly helped by no in period racing history.

A 1962 Ferrari 400 Superamerica LWB Coupé Aerodinamico was RM Sotheby’s top result at Amelia Island when it sold for $4,400,000 – over a million above top estimate. The car was in single-family ownership for half a century and restored to concourse condition in 2012. 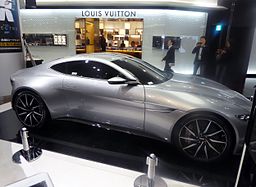 Christie’s sold the 2015 Aston Martin DB10 Spectre one-off car that was used by James Bond in the 007 film Spectre for $3,476,466 in London. The car was sold without a running engine and with the condition that the new, any subsequent owners, will not fit an engine of any kind to make it a running vehicle. (Given the low mileage on some of the hypercars on offer at auction, this may not be much of a hindrance.) Aston Martin will skip the DB10 model name for production cars and showed the DB11 instead at Geneva in 2016.

The 1967 Ferrari 330 GTC Speciale set a new model record when it achieved $3,410,000 at the Gooding 2016 Scottsdale auction. Only four of the 330 GTC Speciale cars were ever made with this model originally belonging to Maria Maddalena Da Lisca, a Tuscan heiress and the wife of the pasta maker Piettro Barilla. She enjoyed the car and drove 33,000 km in it in less than two years. A standard Ferrari 330 GTC rarely achieves a fifth of this price.

Million-Dollar Cars at Public Auctions in 2016

Thus far in 2016, around* 99 cars have been sold at public auction for over a million dollars:

In the battle of the auction houses:

The list takes the published results of the following auctions into consideration:

Next Major Classic Car Auctions in 2016: