RM Sotheby’s third New York sale, entitled ICONS, is scheduled 6 December 2017 at Sotheby’s Manhattan headquarters. Only around 30 cars will be offered in addition to around 20 other lots that include art, expensive wines and children’s cars.

The 1959 Ferrari 250 GT LWB California Spider on offer was one of three Ferraris entered into the 1959 Le Mans 24 Hours race by the Luigi Chinetti’s fabled North American Racing Team (N.A.R.T.). The other two cars were a 250 Testa Rossa and a 250 GT LWB Berlinetta. 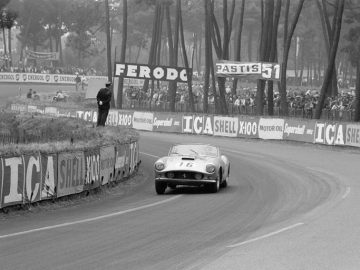 The 250 GT California Spider was piloted at Le Mans 1959 by owner Bob Grossman, a successful sports car dealer based in Rockland County, New York. The car left the factory just five days before Le Mans, arriving with a flash of paint covering the primer and unfinished seats covered with rags. In both Grossman and the Ferrari’s very first outing at the Circuit de la Sarthe, he and co-driver Fernand Tavano finished in an impressive 5th overall and 3rd in class.

After Le Mans, 1451 GT was properly finished in metallic silver and shipped to Grossman’s home in New York. He immediately returned the car to the track, racing in SCCA events at Thompson, Bridgehampton and the Watkins Glen Grand Prix before shipping it to Nassau for Speed Week, where it clinched 1st overall in the Memorial Trophy race.

The California Spider left Grossman’s care after the 1960 season, and passed through a handful of American owners before landing with Jon Masterson of California, who commissioned a complete restoration, which earned the car 1st in Class honors at the Pebble Beach Concours d’Elegance. The car never remained shy for long, returning to Pebble Beach in 1994, running the Colorado Grand, and racing at the Monterey Historics on four separate occasions.

Purchased by its current owner in 2007, the Classiche-certified California Spider continued to make the rounds at some of the hobby’s most important events before another full restoration was completed in 2011 by marque specialists Motion Products Inc., returning the car to its proper Le Mans livery. The restoration earned 1451 GT a platinum award at the 2011 Cavallino Classic, and it has been shown at only a handful of events ever since.

With only eight competition versions of the Ferrari 250 GT LWB California Spiders ever built, these cars are exceedingly rare at auctions. The last one offered at auction sold for a model record $18,150,000 at the Gooding Pebble Beach 2016 sale. Regular non-competition long wheelbase California Spiders usually sell for just less than $10 million.

See also: 2017 RM Sotheby’s New York Icon Sale Auction Preview for more on the other cars on offer in this classic car auction.