The first 1931 Bugatti Type 55 Roadster, one of the most coveted prewar sports cars, is the leading classic car thus far announced for the Gooding Scottsdale 2018 sale. This beautifully restored Bugatti won the French Cup at The Pebble Beach Concours d’Elegance and comes with a suitably high estimate of $4,000,000–$5,000,000. Further blue-chip cars announced for the sale include a 1967 Ferrari 330 GTS, a late-production 1963 Mercedes-Benz 300 SL Roadster, a rare Pinin Farina-bodied 1953 Ferrari 212 Europa Coupe and a 1959 Aston Martin DB Mk III Drophead Coupe. These classics complement the more modern hypercars Gooding announced previously.

Jean Bugatti developed the sensational Type 55 Roadster as a world-class sports car to appeal to Bugatti’s most discerning clients. Under the beautiful body lies the same chassis utilized in the 16-cylinder Type 45 and Type 47 Grand Prix race cars, and under the hood beats a twin overhead cam supercharged eight-cylinder engine that produces 130 bhp.

The Bugatti Type 55 Roadster on offer, chassis 55201, is the very first of only 38 Type 55 examples ever built. This was the car that debuted the model and was shown at the 1931 Paris Auto Show. Delivered new to Duc de le Tremoille, a member of one of the oldest families of French nobility, the car would then go on to be owned by famed Bugatti enthusiast and collector Dr. Peter Williamson for over 40 years. It is reported to have been his favorite Bugatti for road use.

Being the first example built, chassis 55201 has unique features not seen on later examples, such as the Grand Prix-style hood that has shortened louvers on the side and diagonal louvers cut into the top of the hood. Beautifully restored by a marque specialist in 2012, chassis 55201 went on to win the French Cup at The Pebble Beach Concours d’Elegance® following its restoration.

Even more amazing, this historically significant Bugatti still retains its original chassis and matching-numbers engine, and it offers an amazing value for such a significant Type 55.

Several Bugatti Type 35 and Type 57 cars have sold for over a million dollar at recent auctions. Only one Bugatti Type 55 sold at auction in the past four years and it set a new marque record at Gooding Pebble Beach 2016 when a 1932 Bugatti Type 55 Roadster sold for $10,400,000 – the highest price ever paid for a French car at public auction in nominal terms. This was the first time ever that more than $10 million was paid for a Bugatti or a French car at auction.

Designed and built by Pininfarina, the Ferrari 330 GTS was the epitome of mid-1960s GT styling. The harmonious, understated design was a successful update of the popular 275 GTS, incorporating a new frontal treatment inspired by the 500 Superfast.

The Ferrari has been dutifully maintained over the last 50 years and sparingly driven, with less than 25,000 miles since new. Offered with a tool roll, owner’s handbooks, and a Marcel Massini history report, this spectacular V-12 Ferrari is one of the finest open sports cars of its era and a world-class collectible that is ready to be enjoyed by a new collector of distinction. 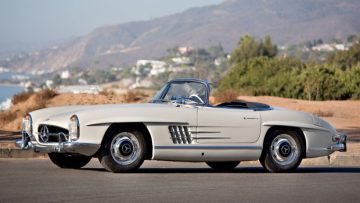 Debuted in 1957 after the 1954 launch of the 300 SL Gullwing, the Mercedes-Benz 300 SL Roadster took the automotive world by storm with its exceptional engineering, styling, and build quality. Mercedes-Benz made many notable improvements throughout production, but the final 210 of the 1,858 total roadster examples built were equipped with the most favorable options. Commonly referred to as “disc-brake, alloy-block” cars, these final examples were fitted with four-wheel disc brakes and a new alloy-block engine that shaved 50 lbs. of weight over the front axle for improved handling and better weight distribution.

The 1963 Mercedes-Benz 300 SL Roadster presented here, chassis 3170, (Estimate: $1,600,000–$1,800,000) is one of the final 100 Roadsters built and retains its original matching alloy-block engine per its build sheet. This top-of-the-line specification car was restored to its original color combination of Weissgrau over a fresh black interior. The wheel covers, factory hardtop, and soft top are smartly finished in black, creating a sophisticated overall look.

It presents a very special opportunity to own one of the universally admired sports cars of all time with all of the most desirable specifications.

Mercedes Benz 300 SL Roadster prices have been firmer at recent auction and this is reflected in the relatively high estimate. Only one Roadster – at Artcurial Paris in October – sold for more than $1.5 million in 2017.

The 212 series cars were among the first collaborations between Ferrari and Carrozzeria Pinin Farina, which formed the basis for one of the longest lasting relationships in the automotive industry, stretching almost 60 years. The 212 Inter would become the 212 Europa, as Ferrari incorporated new factory updates, including three Weber 36 DCF3 carburetors, which bestowed an additional 40 bhp more than the earlier Inter version.

The original owner of the car purchased it new from Chinetti Motors in New York and would go on to display the 212 Europa at the 1961 Pebble Beach Concours d’Elegance®. In 2010, 0279 EU was entrusted to Nino Epifani’s renowned workshop for a ground-up, nut-and-bolt restoration to the very highest standards. During the restoration, the Ferrari was returned to its elegant, original color scheme.

Ferrari Classiche Certified and not shown at a single event since restoration, this stunning 212 Europa offers the new owner the opportunity to present this car at the world’s most prestigious automotive events for the first time since the work was completed.

The 1959 Aston Martin DB Mk III Drophead Coupe, chassis AM300/3/1712, (Estimate: $650,000-$750,000), is one of approximately 14 left-hand-drive examples fitted with the optional, high-performance, triple-carbureted DBD engine. Finished in the beautiful Elusive Blue livery over light gray leather interior, this handsome Aston Martin resided in a private collection for over 30 years and has been dutifully maintained by marque expert Kevin Kay.

The DB Mk III has had just four owners since new and is an ideal candidate for any prestigious tours, rallies and concours events. Offered with restoration records, jack and tools, this distinguished automobile has all the right specifications and is one of the most rare and exclusive Feltham-era Aston Martins.