RM Sotheby’s 23rd annual Amelia Island auction is scheduled for 22 May 2021. As the official auction of the Amelia Island Concours d’Elegance, the one-day sale will see a diverse lineup of more than 80 motor cars with entries spanning the market from pre-and post-war classics through to grand touring and sports cars of the 1950s, ‘60s, and ‘70s, as well as high-performance, modern cars.

RM Sotheby’s results and earnings at recent Amelia Island auctions were as follows:

In 2017, RM Sotheby’s earned an Amelia Island record $70.9 million but in contrast to most years, a second auction day was held during which 63 cars from the Orin Smith collection were sold without reserve to earn a total of $31 million. The top result that year was $7,700,00 paid for a 1937 Bugatti Type 57S Cabriolet by Vanvooren.

According to Donnie Gould, Car Specialist, RM Sotheby’s, “This year’s Amelia Island auction represents what will be one of the most anticipated events of the year and the early consignments of both the Ferrari and the Duesenberg speak to the level and quality of cars our clients and first-time attendees can expect at the auction. J-414, with its Torpedo body and disappearing convertible top, is a “top ten” example among all Duesenbergs. Given its spectacular coachwork, unique provenance, and recent concours-level restoration it’s a natural fit for our Amelia Island auction. Equally impressive and also a “top ten” in the world of Ferrari production cars, the 275 GTB/4 is a terrific complement to the Duesenberg. Given its almost 50-year single ownership and mostly out of the public eye, we anticipate strong interest in what is the ultimate in all road-going Ferraris.”

The Duesenberg Model J on offer is one of two examples built with polished and brushed bare aluminum coachwork and the sole intact survivor. With a very well-known history from new, 2199 enjoyed the care of a handful of Southern California caretakers through its early life and into the late 1940s. In 1951, it was purchased by a longtime Auburn Cord Duesenberg Club member and remained as his prized possession until 1985. The car was subsequently restored, after which it received the coveted ACD Club Category One certification.

Maintained and enjoyed by the same owner since 1973, the 275 GTB/4 underwent a restoration during his ownership, executed by Bob Smith Coachworks of Gainesville, Texas. Presenting wonderfully today in Giallo Solare finish and equipped with desirable Campagnolo alloy wheels, 10987 presents an outstanding opportunity to acquire a 275 that has largely remained out of the public eye until now.

The Ferrari 275 GTB/4 is one of the most popular Ferrari models from the 1960s. It is frequently seen at classic car auctions and generally sells within expectations.

Gooding achieved five million-dollar results including $3,586,000 for a 1967 Ferrari 275 GTB/4 Alloy in its Geared Online May 2021 classic car … END_OF_DOCUMENT_TOKEN_TO_BE_REPLACED

A 1909 Rolls-Royce Silver Ghost and 1935 Godsal Sports Tourer are on sale in the Bonhams Amelia Island 2021 classic car auction in Florida, USA. The … END_OF_DOCUMENT_TOKEN_TO_BE_REPLACED 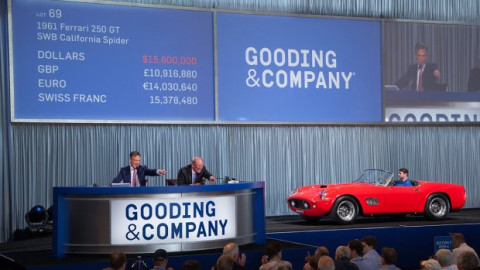 The annual Amelia Island classic car auctions in Florida, USA, are held in conjunction with a Concours d’Elegance. These auctions by RM Auctions, Gooding … END_OF_DOCUMENT_TOKEN_TO_BE_REPLACED