Bonhams achieved a new marque world record price of $15,620,000 for a 1995 McLaren F1 as the highest price paid for a car at the Quail Lodge 2017 sale during the annual Monterey Week in California, USA. However, the overall auction result was rather mixed with several high profile cars, including the much-lauded ex-Team Cunningham Jaguar E-Type Lighweight, failing to clear the reserve margins. (The Jaguar E-Type was sold later for $8 million.) Several cars in the below $500,000 limits sold well in excess of pre-sale estimates while cars around a million dollar seem to struggle. Nine cars, including five Ferraris, sold for more than a million dollar. 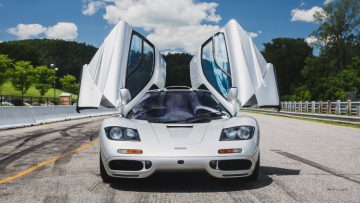 The following was the top ten results (plus one post block deal) achieved at the Bonhams Quail Lodge 2017 according to results published including auction premium:

The 1995 McLaren F1 sold by Bonhams was the 44th of only 64 cars ever produced. It was the first F1 imported and fully federalized in the USA. This McLaren F1 with only 9,600 miles on the clock was sold by its original first owner and in contrast to many other F1s, this McLaren is fully original without later factory performance updates.

The ex-Team Cunningham 1963 Jaguar E-Type Lightweight failed to sell during the auction with a highest bid of $8.2 million. Bonhams announced later that the Jaguar was sold in a post-block deal for only $8 million premium included. (Bonhams often refrains from revealing the price of post-hammer deals.)

In accepting this offer after refusing the higher bid during the auction meant the seller in effect lost a million dollar on the deal. With no published estimate it is hard to determine what the seller was expecting but the highest bid was higher than the model record $7,370,000 set for a 1963 Jaguar E-Type Lightweight at the Bonhams Scottsdale 2017 auction. If the highest bid was accepted, it would have been (briefly) the most-expensive car sold thus far in 2017.

Five Ferraris sold for over a million dollar at the Bonhams Quail Lodge 2017 classic car auction:

This year’s Monterey Week auctions saw eight Ferrari 275 GTBs in various forms on offer with Bonhams offering two – both sold. The 1965 Ferrari 275 GTB Alloy Long Nose sold just above estimate for $3,080,000, as the second highest result at Quail Lodge 2017. This car was used for test purposes by Ferrari to compete in the Monte Carlo Rally.

A 1956 Ferrari 250 GT Berlinetta sold for $1,133,000 as the fifth Ferrari achieving a million dollar at the Bonhams 2017 Quail Lodge sale. The car was raced a few times in period in the USA and is eligible for the Mille Miglia storico.

Two Mercedes Benz cars just missed the million-dollar mark: a 1941 Mercedes Benz 540K Cabriolet and a 1955 Mercedes Benz 300 SL Gullwing coupe. Neither car was top of the range and both sold just within lower estimate.

A 1957 Mercedes Benz 300 SL Roadster failed to sell with an unsuccessful highest bid of $880,000. With eight 300 SL models on offer during Monterey Week, buyers and sellers may have a better indication where the market for these popular cars is heading, although after the Bonhams and first Gooding sales the picture may be even more confusing than before.

Some of the higher profile cars that failed to sell at the Bonhams Quail Lodge 2017 sale include:

The most noticeable failure at the Bonhams Quail Lodge 2017 was the unsuccessful highest bid of $8.2 million for the ex-Team Cunningham 1963 Jaguar E-Type Lightweight. Bonhams announced later that the car was sold for $8,000,000 premium included in a post block deal.

Bidding for the 1956 Maserati 300S Racing Two-Seater driven to victories by Juan Manuel Fangio stopped short around a million below the estimate of $6,000,000 to $7,000,000. The 1980 Ferrari 312 T5 Single Seater Formula 1, Chassis no. 046, campaigned with limited success by Jody Scheckter in his world championship defending season attracted an unsuccessful highest bid of $2.4 million – a late 1970s car might have been more attractive.