A 1950 Gordini raced by Juan Manuel Fangio and a race-winning Peugeot 908 driven by Bourdais are early highlights announced for the Artcurial Paris Rétromobile Sale 2022.

Artcurial earned a good €18 million ($22 million) at the Parisienne 2021 sale, which was held despite the cancellation of the Rétromobile show. In 2020, Artcurial Motorcars earned €23 million ($25 million) at its Paris Rétromobile sale with a sell-through rate of 70% of all lots.

Artcurial announced several cars and collections for its Paris Rétromobile 2022 classic car auction. Information and details are still limited but several cars are likely to attract much attention.

Only two examples of the Gordini Type 18S were ever built with a highly aerodynamic body made entirely of duralumin. Of the 33 different chassis built by Gordini, this #20S berlinetta is the only one to survive in such exceptionally original condition. It has retained the 1950 upholstery from Fangio’s era and is equipped with the only Gordini compressor engine still in existence. This Gordini berlinetta still bears the evidence of its history in competition, as raced by Juan-Manuel Fangio and also its participation in the Rome-Liège-Rome race in 1951.

In 2005, Peugeot announced its intention to compete in the Le Mans 24 Hour race in a turbocharged V12 diesel-engined car. With the new 908 presented for the 2011 season, Peugeot moved from a V12 to a V8 engine. It was in this car, chassis 07, that Sébastien Bourdais and Anthony Davidson won the Zhuhaï 6 Hours, allowing Peugeot to finish the 2011 season with a sixth victory in seven races. No one suspected that this would be the final victory of this exciting period, and the last appearance of a 908 in competition.

The 908-07 is considered to be the ultimate evolution of the 908, featuring every technical development available to the model in 2011. The car in the sale was completely overhauled by Peugeot Sport and delivered to the current owner in October 2017. Since then it has only been started up at demonstrations. Just as Peugeot has announced its return to endurance racing by unveiling its new V6 hybrid-engined 9X8, this 908 HDI represents a glorious period of endurance racing and the best in early 21st century French technology.

Nine extraordinary cars from the Italian marque Bandini will be offered in the Artcurial Paris Retromobile 2022 sale. This very special collection has been assembled by Dino Bandini in tribute to his uncle Ilario, who founded the marque in 1946. The custodian of this marque today, Dino is the author of a comprehensive book on Bandini, the company’s history, and a complete register of the 75 automobiles built by his uncle. Based in Forli in Emilia-Romagna, the marque folded with the death of its founder in 1992. Since that time, his nephew has worked tirelessly to assemble the greatest number of cars built by his uncle, some with exceptional racing provenance.

Coming from the Bandini museum, the cars with notable racing provenance in the sale include:

Bruno Lafourcade was an architect, with many highly innovative projects to his name, and an aesthete with a wholehearted passion for cars. He redesigned his final property around the garage that housed his collection. A great admirer of automobiles built by Ettore Bugatti, he spent a lot of time at the wheel of these sports and grand touring models. He was a very active participant in all kinds of rallies and events and always involved his wife Dominique and son Alexandre in these automotive adventures. He liked to share his passion, spending his weekends in his studio conversing with François Chevallier and Laurent Rondoni or driving with friends.

There are four Bugatti presented in the sale including a 35C with an impressive historic racing provenance, a totally original 44 Faux Cabriolet bodied by Labourdette, a Type 13, and a 37 ‘Petit-Coupé’ reconstruction. There are also two exceptional and extremely rare Alfa Romeo, an SZ Coda Tonda and a Giulietta Sprint Veloce Alleggerita.

There will be 19 rally cars on offer in the Retromobile sale coming from the estate of Beaudoin Lempereur. Lempereur was a well-known figure at Belgian circuits and rallies, for his talents as a driver and also his mechanical expertise, supplying the highest quality spare parts. Passionate about cars from a very young age, he collected the rally cars that had inspired him, including models that he drove in both regularity and competitive events. These cars, which have all been carefully preserved in his garage include a fantastic group of rally Fords, with a Lotus Cortina, a Sierra RS Cosworth, and a Ford RS200.

The traditional Paris Rétromobile Week will return to early February in 2022 with several major classic car auctions scheduled during the same period. 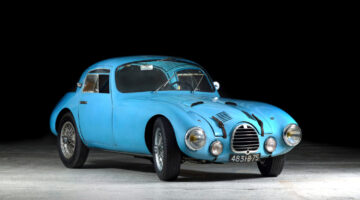 A 2003 Ferrari 550 GTC is the first high-profile car announced for sale in the RM Sotheby's Paris Rétromobile Week 2022 classic car auction. A … END_OF_DOCUMENT_TOKEN_TO_BE_REPLACED

A 1931 Bentley 4½-Litre Supercharged Tourer is offered at the RM Sotheby's Paris 2021 sale. It is, one of the original 50 4½-litre Blowers … END_OF_DOCUMENT_TOKEN_TO_BE_REPLACED

Artcurial announced a Porsche 550, Group B cars, and a collection of Aston Martins and Bristols to join the Le-Mans-Winning Matra at the Parisienne 2021 … END_OF_DOCUMENT_TOKEN_TO_BE_REPLACED